Portorož, Slovenia
BENEFITS
THE PROJECT
GALLERY
HOW IT WORKS
THE SYSTEM

B&B Kovač is a 20-room hotel with a restaurant located in Portorož, Slovenia.

The hotel used to be heated by an oilfired boiler and radiators. Domestic hot water (DHW) was prepared in two 300 litre DHW heaters (V= 2×300=600 litres).

One of the two Mitsubishi Zubadan outdoor units

The hotel owners wished to reduce heating costs and to add cooling capability for the entire hotel, which the hotel previously lacked.

The installer, TermoShop, proposed the installation of two TermoPlus® Hydrobox M23 air-to-water heat pumps with a total heating power of 46kW (2x23kW) and 40kW (2x20kW) of cooling power. Mitsubishi Zubadan outdoor units were used and fan coils were installed for cooling during the summer months. A new 1000 litre tank replaced the 2×300 litre units.

The building did not require maximum heating or cooling power during the entire heating / cooling seasons. For this reason a cascade heat pump operation system was chosen.

As the hotel is located in a coastal region, heating demand varies significantly. A single 45 kW unit would normally require a minimum power of ~15kW. Since two smaller units were installed in cascade one automatically switches off when not needed, allowing a minimum power of ~6kW. This translates into greater savings and added redundancy.

The radiators and existing boiler were kept as an added backup solution since the equipment was not very old.

The estimated annual cost using the heat pump was €4.000 including:

This is a reduction of more than 58% in total operational & ownership costs in heating alone, without taking into account the bonus of summer cooling which is included in the €4.000 annual cost. 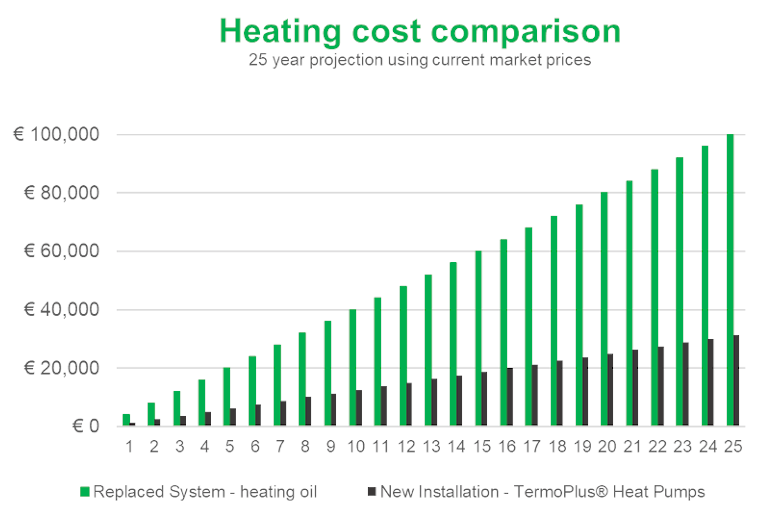 The best part of the project is the superb economy that will last for many years and will make this a very profitable upgrade.

When you visit any web site, it may store or retrieve information on your browser, mostly in the form of cookies. Control your personal Cookie Services here.